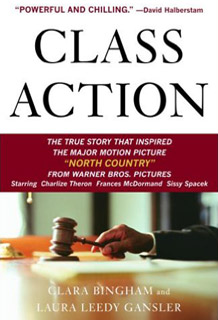 In the tradition of A Civil Action and Erin Brockovitch, Class Action is a story of intrigue and injustice as dramatic as fiction, but all the more poignant because it is true. Jenson v. Eveleth Mines, the first sexual harassment class action in America, permanently changed the legal landscape, as well as the lives of the women who fought the battle.

In the coldest reaches of northern Minnesota, a group of women endured a shocking degree of sexual harassment—until one of them stepped forward and sued the company that had turned a blind eye to their pleas for help.

In 1975, Lois Jenson, a single mother on welfare, heard that the local iron mine had begun hiring women. The hours were grueling but the pay was astonishingly good, and Jenson didn’t think twice before accepting a job cleaning viscous soot from enormous grinding machines. What she hadn’t considered was that she was now entering a male-dominated, hard-drinking society that firmly believed that women belonged at home—a sentiment quickly born out in the relentless, brutal harassment of every woman who would work at the mine. When a group of men whistled at her walking into the plant, she didn’t think much of it. When they began yelling obscenities at her, she was resilient. When one of them began stalking her, she got mad; when the mining company was unwilling to come to her defense, she got even.

From Jenson’s first day on the job, through three intensely humiliating trials, to the emotional day of settlement, it would take her twenty-five years and most of her physical and mental health to fight the battle with the mining company. With the help of Patricia Kosmach, the first miner to join the suit with Jenson, and her luck at finding perhaps the country¹s finest legal team for class-action law, Jenson would eventually prevail, although at great emotional and economic cost.

Read Washington Post and LA Times Reviews
Read more reviews and excerpt at Booknoise.net
Brilliantly reported, documented and written, Class Action is only about sexual harassment in name. The real story is about the too-frequent indifference and absurdity of both the workplace and our legal system. Protagonist Lois Jenson, a worker in a Minnesota mine, is a real Erin Brockovitch. Her war is not only that of every woman, but of every citizen.”
–Bob Woodward, author of All the President’s Men and Maestro: Greenspan’s Fed and the American Boom
Fascinating and chilling, with powerful echoes of Silkwood. I could not put Class Action down.”
–David Halberstam, author of War in a Time of Peace and The Best and the Brightest
Most of us learn about law from the tidy conclusions of judges’ opinions, but Clara Bingham and Laura Leedy Gansler reveal a greater truth about our legal system in Class Action. This always riveting, often horrific, account of a landmark sexual harassment case is an unsparing look at the real nature of judicial progress–and the costs of even the most dramatic courtroom victories.”
–Jeffrey Toobin, author of A Vast Conspiracy and Too Close to Call