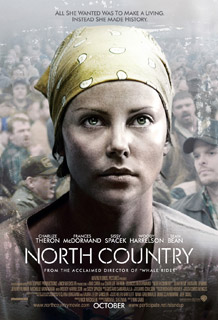 North Country is a fictionalized adaptation of Clara Bingham and Laura Leedy Gansler’s book Class Action and it tells the story of a young mother, Josey Aimes (Charlize Theron) who leaves her abusive husband and gets a well-paid union job in the taconite mine where her father (Richard Jenkins) also works. Josey and her female co-workers (Frances McDormand, Rusty Schwimmer, and Michelle Monaghan) put up with an onslaught of sexual taunts unwanted physical contact by their male co-workers (Jeremy Renner). When her complaints to the mine owners are ignored, Josey hires a lawyer (Woody Harrelson), but the legal case is almost as traumatic for Aimes as the harassment on the job. Directed by Niki Caro (Whale Rider), North Country and its star-studded cast, which also includes Sissy Spacek and Sean Bean, captures the experience that real-life that Lois Jenson and her fellow plaintiffs suffered through and also triumphed.