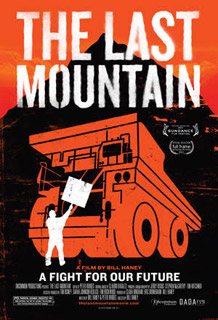 The Last Mountain is a feature-length documentary film directed by Bill Haney and produced by Haney, Clara Bingham and Eric Grunebaum. The film premiered at the 2011 Sundance Film Festival and went into general release on June 3, 2011. The film explores the consequences of mining and burning coal, with a particular focus on the use of a method for coal strip-mining in Appalachia commonly known as mountaintop removal mining.

Based in part on Robert F. Kennedy, Jr.’s 2005 book Crimes Against Nature and featuring Kennedy and a cast of activists and experts, the film considers the health consequences of mining and burning coal and looks at the context and history of environmental laws in the United States. Exploring a proposal to build a wind farm on a mountain in the heart of “coal country,” rather than deforesting and demolishing the mountain for the coal seams within, the film suggests that wind resources are plentiful in the U.S., would provide many domestic jobs and that wind is a more benign source of power than coal and has the potential to eliminate the destructive aspects of coal.