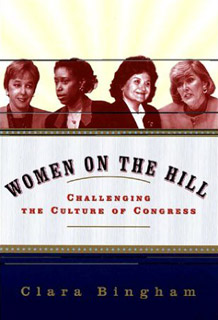 In 1991, Anita Hill testified before the Senate Judiciary Committee to accuse Clarence Thomas of sexual harassment. The outrage among feminist that greeted Thomas’s subsequent confirmation as a Supreme Court justice swept women into high political office in unprecedented numbers. Women on the Hill addresses the politics of gender in the aftermath of Anita Hill’s allegations. Of equal importance, it presents four of the women on the front lines of the gender battles: Cynthia McKinney (Rep.-Georgia), Louise Slaughter (Rep.-New York), Patty Murray (Sen.-Washington) and Pat Schroder (Rep.- Colorado).

In Women on the Hill, Clara Bingham tells the story of what happened as all four women sought to change nothing less than the culture of Congress and the agenda of a nation. She observes that this generation of congresswomen views itself as a group of settlers rather than as pioneers, free to reframe the public debate. As a result, the congresswomen have experimented with political styles—meeting with varying degrees of success—and Bingham chronicles the political show downs, gains and reverses that these women have encountered.

The handful of people who were in the Senate Gallery on that evening in November 1993 will never forget it. For hour after windy hour, the members of the institution that calls itself the world’s greatest deliberative body had talked about legal precedent, Senate procedure, privacy–everything, it seemed, but the issue at hand.” (READ FULL REVIEW)
—Los Angeles Times